All traders of binary options should get comfortable with using charts. This brief tutorial aims to get you acquainted with candlestick charts, which are one of the favoured chart types among binary traders.

Candlesticks are comprised of a body (the main coloured bar), an upper wick (the thinner line coming out of the top of the body), and the lower wick (the thinner line coming out of the bottom of the body). The body’s colour depends on where the specific candlestick opens and closes. So if it is green then it opens at the bottom of the candlestick and closes at the top (meaning the particular candlestick is charting an asset that is rising in value). If it is red then it opens at the top and closes at the bottom (meaning that the asset in question is dropping in value).

The length of a wick relates to buyers or sellers causing the price of an asset to either rise or fall, thus shortening the length of the candlestick. So for instance, a red candlestick with a short body and a long lower wick is describing an asset that dropped in price along the entire length of the wick and then rose back up as buyers started getting in at the new lower price. Conversely the a wick at the top of a green candlestick represents the price an asset reached before traders began to capitalise on the new higher price and began selling it, thus causing it to drop in value.

It sounds much more complicated than it is in reality. Basically long lower wicks mean lots of buyers are pushing the price up, and long upper wicks mean lots of sellers pushing the price down. Generally large wicks and small bodies describe more turbulent trading periods as more and more buyers and sellers rush in to affect a market’s uncertainty.

When the body of a candlestick is greatly affected by buyers or sellers reducing the size of the candlestick’s body and elongating its wick, then you are dealing with what is known as a pinbar candlestick. Pinbars are found at times when reversals are occurring, so typically you will find pinbar candlesticks at the top or bottom of a trend. Pinbar candlesticks usually signal that a change of direction is about to occur so they are important to keep track of.

Doji candlesticks are similar to pinbars, the difference being that they have wicks of equal length on either side. Typically dojis represent market indecision, i.e. equal numbers of buyers and sellers on both sides of the fence. These, like pinbars, can be used for reversals, you do find them at either side of trends, but generally pin bars are more prevalent in times of reversals. Doji candlesticks are more prevalent when an asset is about to take a new direction. They become evermore visible at times of consolidation, in other words at times when an asset appears to be moving laterally. At the end of this sideways movement you will typically see the beginning of  a new trend.

Now to ground this information in some examples. Say you are following a downward trend, with a series of red candlestick and then at the bottom of the trend you see a small pinbar. This could mean that either the downward trend is about to reverse, or that this pinbar is a temporary blip and the trend is due to continue. A riskier binary option with a higher payout would be to lock in your Call (that the asset is due to rise) without waiting for further confirmation. A more conservative trader might wait for the next candlestick to confirm his theory and then place a trade at a reduced payout but higher probability of ending in the money, or not at all if the theory proves to be incorrect. Also be sure to watch your durations. These are the be all and end all when trading binary options. If you observe a pinbar at the very top of an hour long up-trend then this is a very good indication that a reversal is about to occur. But bear in mind that trends can intermittently be broken by sporadic reversals that are short lived. When forecasting a reversal you are best served to lock in shorter durations so you can closely monitor whether you are dealing with a true reversal or a blip on an otherwise upward movement. Finally, say your preferred asset begins to move sideways, the candlesticks describing this lateral movement begin to more closely resemble dojis, then it may be a good idea to place a trade on a new trend. Beware though lateral movements can carry on for hours and it is vital that you observe exactly what is going on within them. This jostling between equal numbers of buyers and sellers will ultimately determine what direction the asset is likely to trend in next. That’s it for candlesticks. Run along and go practice! 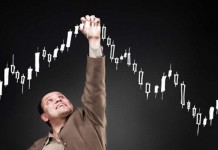 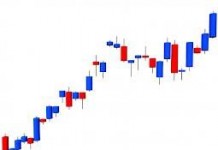